Most businesses rise and fall by the impulses of their customers. But if your business is sugar, Chris Hanmer has good news for you.

"Sweets in general do well when the economy is good—and when things are bad," says Hanmer, chef and proprietor of CH Patisserie in Sioux Falls, South Dakota.

This is a sweet insight for retail bakers in particular, given that personal savings are currently outpacing consumer spending, according to the U.S. Department of Commerce. To Hanmer’s point, in a world where there aren’t many affordable indulgences, sugar is one that consumers willingly turn to year-round.

But what happens during the holidays, when consumers are more likely to spend on bigger luxuries, such as iPads or jewelry? Sweet goods go along for the ride, as consumers double down on that “treat yourself” attitude. According to a survey by market research firm Field Agent, 92 percent of respondents said they indulge in food more at Christmastime than other times of the year—and the most common way to do so is by eating more sweets, according to 62 percent of respondents.

That’s certainly been Hanmer’s experience. “People buy the things that they wouldn’t spend money on before,” he says.

Renato Poliafito, co-founder of New York City bakery Baked, agrees. “It's generally understood that [consumers] are going to indulge during the season,” he says.

The holidays may be synonymous with decadent pumpkin pies and sweet sticky puddings, but Hanmer has found that he doesn’t have to go with full-size desserts to see an uptick in sales. It’s the small stuff—carefully crafted macarons, thoughtfully packaged candies—that moves the most. “Everything is designed to be individual,” he says.

Single-serving sweets stay fresh across dayparts and ease portion-size concerns, of course, but during the holidays, they’re also more likely to be picked up by consumers seeking personal, indulgent treat or thoughtful presents. CH Patisserie starts the holiday season in the fall by rolling out small bags of house-made candies—caramels, toffees and chocolate bars. Nostalgic offerings, such as chocolate snowmen and Christmas cookies, grow in popularity as the season changes from fall to winter.

The importance of quality packaging can’t be overstated, given that the majority of these purchases are given as gifts, Hanmer says. Upscale packaging of a solo servings also encourage impulse buys by consumers seeking little luxuries. As a rule of thumb, Hanmer estimates that he spends 50 cents on ingredients and labor for the treats themselves and $1 to package them.

“We choose ingredients based on flavor, not price,” explains Amy Emberling, co-managing partner of Zingerman’s. “That’s the difference between us and other bakeries. Even if it’s going to cost more, we find a way to make money in some other way, rather than skimping.”

Zingerman’s focus on quality ingredients means its baked goods may cost a little more than offerings at competing bakeries. That’s 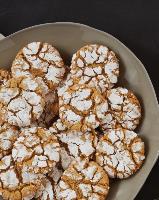 where marketing comes into the picture: Through signage in the store and on its website, Zingerman’s takes every opportunity to tout why a customer might want to spend more on better ingredients, highlighting “real butter,” “rich molasses” and “Indonesian cinnamon,” as examples of the worthwhile ingredients they use.

Beyond marketing, Emberling and her staff entice shoppers to make a purchase by giving out samples—lots of them, of anything anybody asks for, at any time. Samples are especially valuable at the end of the year, when the bakery starts production on special ethnic holiday treats—Hungarian beigli, German stollen. “They only appear for a limited time,” Emberling says of the complex pastries, for which the bakery charges even more due to their limited production and labor intensiveness.

Despite the higher price point, these pastries sell by the thousands. Emberling believes that it comes down to trust built by the bakery’s try-and-taste-the-difference philosophy. “When we tell [customers] that an ingredient tastes really good and we use it for that reason, they trust us,” she says.

“People like a sense of luxury no matter what, whether it’s a dessert or a car,” Poliafito says. “The more exclusive you make something appear, the more they want it.” Add in a limited-time offering, and it’s a surefire bottom-line booster. The moneymaker of Baked’s holiday offerings? The Stump de Noel, a novelty that he says customers “go crazy” over.

“It’s a buche that’s on its side, so it looks like a tree trunk,” Poliafito explains. Baked starts making the stumps in the fall, well before Christmas, and bakers begin by decorating the stumps with fondant mushrooms and fall leaves in oranges, yellows and browns. As the weather gets frostier, so, too, do the stumps. By the time Christmas comes, the stumps are covered in fondant holly leaves and dark berries, and dusted in snow. Realism is part of the appeal, and while the decorating treatment evolves throughout the season, the stumps look consistently true to life, rustic and beautiful in its imperfections.

The highly designed, limited-edition dessert is produced in several iterations that customers can collect and devour all season long. “It’s at a higher price point, but it sells really well,” Polafito adds.

There’s no better time than the holidays to go all out, after all. You'll Love These Articles Too The Shift in Counter Culture Protein: It's What's for Breakfast